Wan Azizah wants to be PM,
to create history...

I don't know what happens in the household of PKR president Anwar Ibrahim, but it does not harm some men to be told, "You get dinner ready for the family tonight, darling. I have to attend to important matters of state."
In a completely hypothetical situation, if hubby refuses, Dr Wan Azizah Wan Ismail could easily say, "I am the deputy prime minister. Time waits for no man, neither does a good woman."
It would be good for some Malay men to realise that women are not shrinking violets or door mats.
If I were Wan Azizah, why should I relinquish my position, as deputy prime minister? Any woman worth her salt would stand her ground and not allow her husband, or the prime minister-in-waiting, or anyone else, to oust her from her perch.
Having made history as the first female deputy prime minister, she might become the first woman Malaysian prime minister. (Sorry Nurul Izzah! Mothers always have the first pick and are always right.)
Naturally, Wan Azizah could only become prime minister if Dr Mahathir Mohamad were to become indisposed.
As a Muslim woman prime minister, her appointment would elevate Malaysia to the ranks of the progressive countries, which have women prime ministers or presidents. Britain, Israel, Germany, India, Australia, South Korea and Indonesia.As deputy prime minister, Wan Azizah is the "number one woman" in the nation. She wields much power, or as much power as Mahathir, will allow.

Pundits claim that since Pakatan Harapan's formation, Mahathir's guiding hand has caused a sea change in Wan Azizah.
She exudes more confidence, and is more self-assured. Gone are the shrill voice and hesitation, which hampered her when the responsibility of leading an opposition coalition, in her husband's absence, was thrust upon her.
On the other hand, some political observers claim that she has also developed a lust for power.
Malaysia is a patriarchal society and becoming prime minister is an opportunity for a woman to make her presence felt.
In Malaysia, Malay Muslim men make the rules; but they also bend them to their advantage. Women cannot show themselves to be better than the men, without incurring their wrath.
Recall how PAS president Abdul Hadi Awang humiliated Wan Azizah when she was nominated to be the Selangor MB in 2014.
Perhaps, as prime minister, she can wield her magic wand and say, child marriages will be a thing of the past. Sex education must be introduced in schools. Single women will not be whipped for adultery. Syariah law will be standardised throughout Malaysia. Obedient wives’ clubs will be disbanded because they demean women. Men cannot marry more than one wife.
She could inform Malay Muslim women that the world can be their oyster, and tell many of the Malay men that it is alright to venture from their tempurung (shells).
Change will not come overnight and hundreds of thousands of Malay men will resist. This problem was created because Malay men (and women) were indoctrinated by many generations of Umno Baru leaders who know only one thing. Cash. With cash, they bought power, influence and transformed themselves into Adonises.

Time to speak out
Nurul Izzah, the daughter of Wan Azizah and Anwar, is described as the "Reformasi princess". Most people consider that her work is done. Her mission was to free her father, when many Malaysians were swept up in the Reformasi movement.
Deprived of a childhood, with her formative years spent criss-crossing the globe, garnering support to free her father from the clutches of the then prime minister (who is the current prime minister), she has followed the path of many career politicians, like former disgraced prime minister, Najib Abdul Razak, and has, since her graduation, known only, the life of a politician.
Malaysians expressed regret and anger when Nurul resigned as PKR vice-president and relinquished her appointment as the chairperson of Penang PKR. She has done the right thing and now, she should enter the real world, and see how the ordinary, downtrodden Malaysians live.
It destroys a nation and discourages integration when non-Malays are considered second-class citizens. It is frustrating to find that the Malays, who are spoon-fed and pampered with benefits, have grown lazy, and are saddled with a strong sense of entitlement.
Nurul should observe how the mock rituals of Umno-Baru's Islam have divided Malaysia and acknowledge her father's role in the Islamisation, division and dumbing down of education in Malaysia. 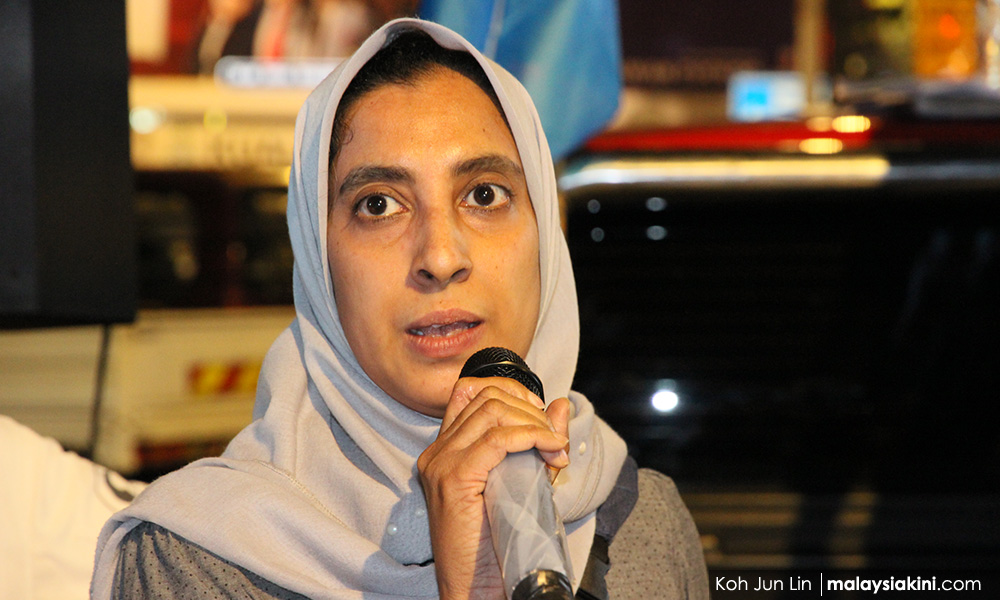 In the course of her travels overseas, she will have met thousands of successful Malays, who in their adoptive country, did not live off handouts. In contrast, the Malays in Malaysia are condemned to a life on crutches. Her father announced that Malays need time to accept a shift from race-based to needs-based affirmative action policies. So, when will be the right time? After another 61 years?
More importantly, when PKR politician Latheefa Koya (above) criticised the PKR party for nepotism and cronyism, Nurul's silence on the defence of freedom of expression was worrying.
The PKR members who want Latheefa's scalp are daft. Why shoot Latheefa for saying what had to be said?
After all, the silence of the party members and the rakyat allowed Umno-Baru/BN to become so morally and financially corrupt that Malaysia was brought to its knees. Speak out! Do not let this happen again.
By right, the post of prime minister could be filled by any capable Malaysian, and it does not have to be a Malay. Despite the Umno-Baru rhetoric, Malaysia has never had a real Malay prime minister. - Mariam Mokhtar,mk
tumpang sekole...?: Nasihat Raja Bomoh kat Anwar dan Dr.M...