In medieval times, Islamic thinkers elaborated the theories of the ancient Greeks and made extensive medical discoveries.
There was a wide-ranging interest in health and disease, and Islamic doctors and scholars wrote extensively, developing complex literature on medication, clinical practice, diseases, cures, treatments, and diagnoses.
Often, in these medical texts, they incorporated theories relating to natural science, astrology, alchemy, religion, philosophy, and mathematics.
In the "General Prologue" to the "Canterbury Tales," contemporary English poet Geoffrey Chaucer referred to the authorities of Abu Bakr Muhammad ibn Zakariya' al-Razi, a Persian clinician (al-Razi), and Abu 'Ali al-Husayn ibn Sina, () a renowned physician, among other Islamic polymaths.
In fact, Western doctors first learned of Greek medicine, including the works of Hippocrates and Galen, by reading Arabic translations.
Influences on Islamic medicine 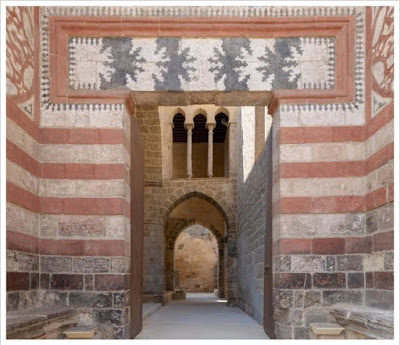 The Mansuri Hospital in Cairo, Egypt, was an important teaching hospital in medieval times.
Islamic medicine built upon the legacies of Greek and Roman physicians and scholars, including Galen, Hippocrates, and the Greek scholars of Alexandria and Egypt.
Scholars translated medical literature from Greek and Roman into Arabic and then elaborated upon it, adding their findings, developing new conclusions, and contributing new perspectives.
Islamic scholars expertly gathered data and ordered it so that people could easily understand and reference information through various texts.
They also summarized many Greek and Roman writings, compiling encyclopedias.
Rather than being a subject in its own right, medicine was part of medieval Islamic culture. Centers of learning grew out of famous mosques, and hospitals were often added at the same site. There, medical students could observe and learn from more experienced doctors.
From 661 to 750 C.E., during the Umayyad dynasty, people generally believed that God would provide treatment for every illness. By 900 C.E., many medieval Islamic communities had begun to develop and practice medical systems with scientific elements.
As interest in a scientific view of health grew, doctors searched for causes of illness and possible treatments and cures.
The medieval Islamic world produced some of the greatest medical thinkers in history. They made advances in surgery, built hospitals, and welcomed women into the medical profession.

Al-Razi
The Persian physician, chemist, alchemist, philosopher, and scholar al-Razi lived from 865 to 925 C.E.
He was the first to distinguish measles from smallpox, and he discovered the chemical kerosene and several other compounds. He became the chief physician of the Baghdad and Rayy hospitals.
As an author, al-Razi was prolific, penning more than 200 scientific books and articles. He also believed in experimental medicine.
Known as the "father of pediatrics," al-Razi wrote "The Diseases of Children," likely the first text to distinguish pediatrics as a separate field of medicine.
He also pioneered ophthalmology and was the first doctor to write about immunology and allergy. Records  that al-Razi discovered allergic asthma, and he was the first to identify a fever as a defense mechanism against disease and infection.
Also a pharmacist, al-Razi wrote extensively on the subject, introducing the use of mercurial ointments. Records attribute many devices to him, including spatulas, flasks, mortars, and phials.
Records indicate that al-Razi traveled throughout Persia, teaching medicine and treating rich and poor alike.
Regarding medical ethics, al-Razi wrote:
"The doctor's aim is to do good, even to our enemies, so much more to our friends, and my profession forbids us to do harm to our kindred, as it is instituted for the benefit and welfare of the human race, and God imposed on physicians the oath not to compose mortiferous remedies."
al-Razi
As was common in Europe and the Middle East at the time, al-Razi believed that demons could possess the body and cause mental illness.

Ibn Sina, who many Europeans referred to as Avicenna, was also Persian. He had many skills and professions, and he wrote approximately 450 books and articles, 240 of which still exist today. Forty of these focus on medicine.
Among ibn Sina's significant contributions to medieval medicine were "The Book of Healing," an expansive scientific encyclopedia, and "The Canon of Medicine," which became essential reading at several medical schools around the world.
The universities of Leuven, in Belgium, and Montpellier, in France, used these texts into the middle of the sixteenth century.

The Canon of Medicine

Also called "The Law of Medicine," ibn Sina wrote this five-volume textbook in Arabic. Later, people translated it into several languages, including English, French, and German.

Medieval Islamic medications were usually plant-based, as had been those of Ancient Greece, Rome, and Egypt.

According to a  published in 2016 in the Iranian Journal of Medical Sciences, Islamic physicians used various drugs for anesthesia. al-Razi was the first doctor to use inhaled medication for this purpose.
Plants and drugs to relieve pain and anesthesia included hemlock, mandrake, henbane, mandragora, opium poppy, and black nightshade. The patient would eat, drink, or inhale them, or they would apply them topically. Some doctors also used ice to relieve pain.
Doctors used poppies, the seeds of which contain codeine and morphine, to relieve:


Medieval Islamic physicians used a wide range of herbs, including the following:
A mixture of dill seed, chamomile flower, yellow sweetclover, mallow leaves, flaxseed, cabbage, and beetroot, boiled together and added to a bath as an analgesic for people with cancer
Garlic in many treatments, including urinary problems
Juniper or pine needles in a bath, to relieve allergic skin problems
Oregano, for its antiseptic and anti-inflammatory properties
Cinnamon for wounds, tumors, and ulcers
Cannabis and opium: Doctors prescribed these, but only for therapeutic purposes, as they realized that they were powerful drugs.
There is evidence that some people died of overdoses when using certain medications to cure forgetfulness, possibly due to medical malpractice.
Surgery
Medieval Islamic physicians performed more surgeries than their Greek and Roman predecessors, and they developed new tools and techniques.
In the 10th century, Ammar ibn Ali al-Mawsili invented a hollow syringe that he used to remove cataracts by suction.
Abu al-Qasim al-Zahrawi was an eminent surgeon who lived and worked in Andalusia, Spain. He invented a number of instruments, including forceps, pincers, lancets, and specula. He also used catgut to sew up wounds.


Apart from cataracts, medieval Islamic doctors also performed eye surgeries to treat trachoma.
Cauterization was a common procedure, involving burning the skin to prevent infection and stem bleeding. A surgeon heated a metal rod and placed it on the wound to clot the blood and improve healing.
Also, surgeons practiced bloodletting to restore the balance of humors, the four elements or characteristics that formed the basis of much medical practice from Greek times until the 17th Century.
They would draw blood from a vein, sometimes using a practice called "wet-cupping." This involved placing a heated glass cup over an incision in the skin.

There were also hospitals, including teaching hospitals, where students could learn how to treat patients.
Cairo (in Egypt), Harran (in Turkey) and Baghdad (in Iraq) had famous hospitals.
The name given to hospitals was "bimaristan," from a Persian word meaning "house of the sick."
According to Oxford Islamic Studies Online, the term referred mainly to mental health facilities, although hospitals offered a wide range of services, and people did not always have to pay.
Female doctors
Female doctors were not uncommon in medieval Islamic medical practice, according to  published in The Lancet in 2009.
Some women from the families of famous physicians appear to have received elite medical training, and they probably treated both males and females.
Others would have provided medical care without formal training, as a family member or a neighbor.
One advantage of women being able to provide health care was that they would be more likely to understand women's health issues.
Another was that fathers and male guardians would prefer women to see a female attendant, although treatment from males was deemed appropriate in some cases.
Takeaway
While Europe was in the so-called Dark Ages, Islamic scholars and doctors were building on the work of the Greeks and Romans and making discoveries that continue to influence medical practice.
Among the many achievements of medieval Islamic medicine were an improved understanding of the body's functions, the establishment of hospitals, and the incorporation of female doctors.
Refrances:
https://www.medicalnewstoday.com/articles/323612.php#influences