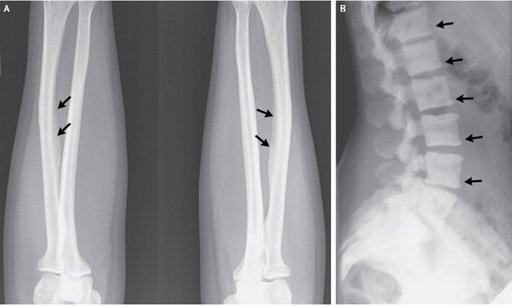 A 47-year-old Michigan woman developed a bone disease rarely seen in the U.S. after she drank a pitcher of tea made from at least 100 tea bags daily, for 17 years, researchers report.

The Detroit woman visited the doctor after experiencing pain in her lower back, arms, legs and hips for five years.

X-rays revealed areas of very dense bone on the spinal vertebrae and calcifications of ligaments in her arm, said study researcher Dr. Sudhaker D. Rao, a physician at Henry Ford Hospital who specializes in endocrinology and bone and mineral metabolism.

The researchers suspected the woman had skeletal fluorosis, a bone disease caused by consuming too much fluoride (a mineral found in tea as well as drinking water).

The patient's blood levels of fluoride were four times higher than what would be considered normal, the researchers said.


Rao said the patient was originally referred to him because her doctors suspected she had cancer, which can also show up on an X-ray as areas of dense bone. But because Rao had seen cases of skeletal fluorosis in his native India, "I was able to recognize it immediately," he said.

Excess fluoride is typically eliminated from the body by the kidneys, Rao said. But if one consumes a lot of it, as this patient did through tea drinking, over time, the fluoride forms crystal deposits on bone, Rao said.

A few other cases of skeletal fluorosis caused by tea drinking have been reported in the United States. In these cases, patients typically drank a gallon of tea a day, Rao said. Rao and colleagues instructed their patient to stop drinking tea, after which she experienced an improvement in symptoms. The fluoride deposits will gradually go away as the bone remodels (or repairs) itself, a process that occurs frequently in the body, Rao said.
A description of the case will published tomorrow (March 21) in the New England Journal of Medicine.

Pass it on: A 47-year-old U.S. woman developed a bone disease after drinking a pitcher of tea a day for 17 years.